The London 2012 vacation started on the evening of 27th July as we hopped on the plane, just hours before the opening ceremony was about to start. That meant we would miss it which in turns out was perhaps a slight oversight since in the end so much (all good) was said about it in the press and by just people that had watched it.

We were fully prepared for this flight and the arrival to be absolutely harrowing, with bags lost, hours in immigration and the like. We bought travel insurance in case the bags were lost and threw in an extra change of clothes in our hand luggage for good measure. Amazingly however, there were no problems at all. The immigration hall was empty, the baggage came quickly and we zoomed onto the tube to catch a ride to High Barnet to put our bags down with Mom’s friend whom we would be staying with. 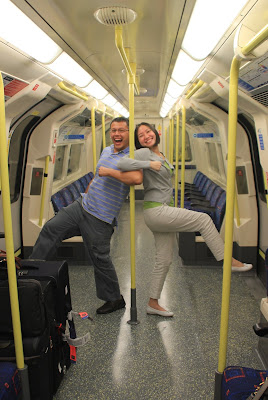 After that, we headed straight to Wimbledon! It was exciting for Chunnie and I since neither of us had been there before but had watched many matches on TV over the years.  (Side note: we had also planned to go watch the cycling road race, but alas we left the house too late and just didn’t have time.) Once we got off the train, Marisa showed us that the best way was to get a cab from the tube station to the venue itself rather than walk for 20min. It was £2.50 (per person) well spent since it was a quick ride and we were a little tight for time. 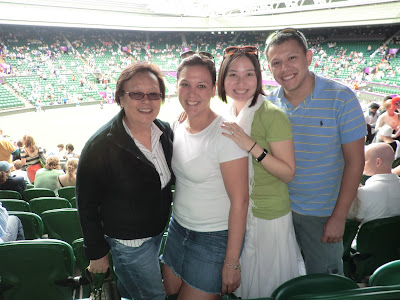 We swiftly made our way through the security checks, again proving that all the reports of long lines had been blown out of proportion. I guess it’s a British thing to exaggerate everything, including the prowess of their athletes. After the obligatory photo in front of Centre Court we climbed up to the stairs to our seats and were told “2 minutes to take your seats!” So we ran round the corner and sat down just as Tomas Berdych and Steve Darcis started their match. 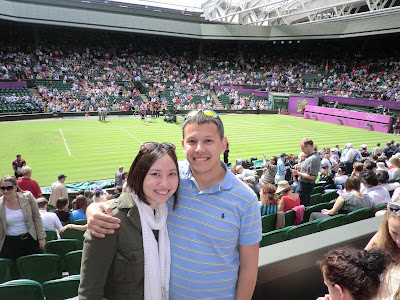 After watching for a few games, we decided that our stomachs were more important and since it was lunchtime already we should pop out quickly for some IOC-accredited food before the heavy hitters (Roger, Serena) arrived on court. So we trooped out and bought hot dogs, pizza and Coca-Cola (all purchased using Visa). The food was expensive but not really too bad. During the short sojourn outside Centre Court I walked around to some of the outside courts and got some real close-up action including Zvonerava in a match and more excitingly, Roger Federer! Roger was warming up and i was standing just court-side! 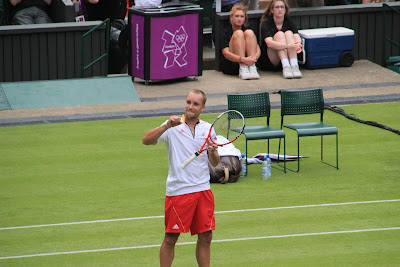 Steve Darcis had managed to upset Tomas Berdych and that means the first of the famous folks came onto the court. Serena Williams came on with her first round opponent Jelena Jankovic. Serena looks like a beast on TV and now I can attest she looks like a beast in person. She plowed through Jelena without a problem, the funny thing was that I remember a time when Jelena was actually good. One person in the crows who must’ve approved of this was Michelle Obama who was about 15 rows in front of us and causing quite a commotion. At every stoppage in play people stand up and try to catch a picture of her. 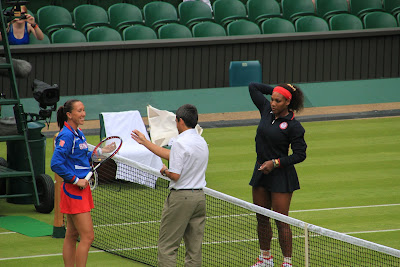 Next up was Roger, the king of Wimbledon and his opponent Alejandro Fall. Roger was good in the first set but then lost his way in the second. It was shocking but Roger had a chance of getting kicked out in the first round! Fortunately for him he pulled himself together and won it in the third set. During this match Centre Court was packed and you could tell people were there mainly to watch Roger. 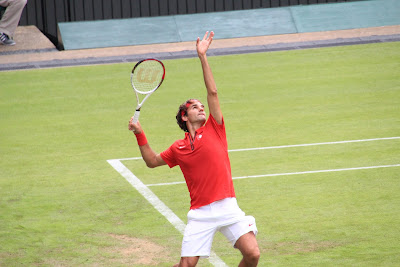 In the final match Anne Keothavong from Great Britain took on Caroline Wozniacki and Centre Court promptly emptied out. We were included in the exodus as we took the opportunity to enjoy a Wimbledon classic of strawberries and cream… Ahhhh… We did pop back into the match for a while, I was surprised to see Anne had managed to take a set and the crowd was roaring much louder than at any point previously. However, it was getting late in the day and we were all jetlagged. That was the trigger for us to head home, tired but happy. 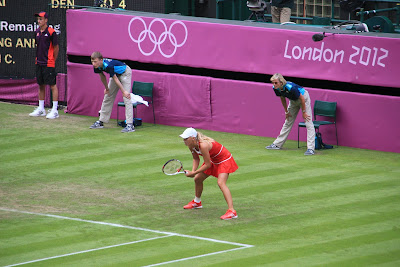 This entry was posted in travel and tagged london 2012, olympics, tennis, wimbledon. Bookmark the permalink.