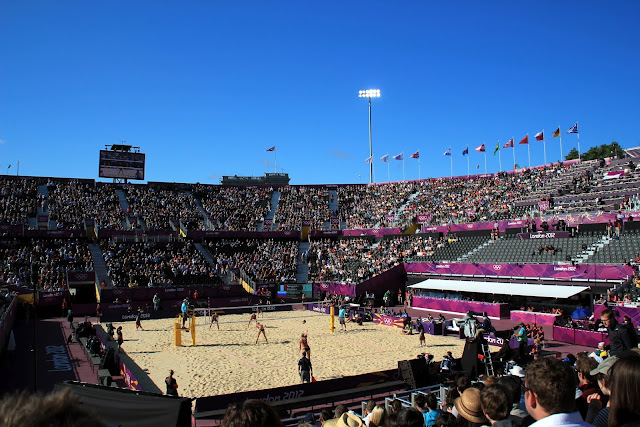 The second day entailed an early start since we had to be at Horse Guards Parade by 9am for the start of the beach volleyball preliminaries. We left the house at 7am and got there pretty much right on time. There was no problem with the tube, no problems walking to the venue and again no problems with getting through security. If not for a stop for coffee on the way to our seats we would have gotten there right in time for introductions and the start of the match. Those few minutes we were late made me grumpy (sorry Chunnie) but that was soon forgotten since it was such a good time! 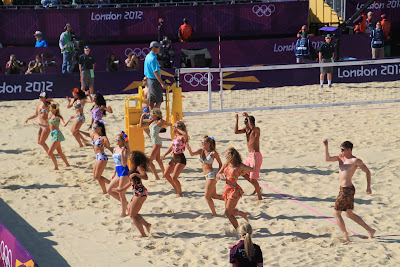 The sun was blazing, there were cute girls in bikinis (not including the cheerleaders) and the crowd was into the action! The beach volleyball really is an event. Between points there is loud music playing, and to Chunnie’s delight there was a commentator encouraging the crowd and telling you what has just happened! The points are quick and exciting and it’s just got this fantastic vibe since the stands were packed and the commentator and music help the crowd get buzzing. 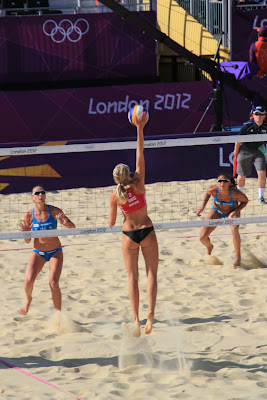 In the first match Russia took on Italy and I just had to cheer for italy since that’s my heritage. That’s despite the fact the Russian girls definitely looked cuter 🙂 How can I not use that to find a team to cheer for? It took three sets and eventually the Italians did prevail so all was good! After that match we took the opportunity to walk around the stadium. It is really quite incredible to see that a temporary structure could be made to hold fifteen thousand people and still have a view of the palace behind it. Kudos to the London 2012 organizers! 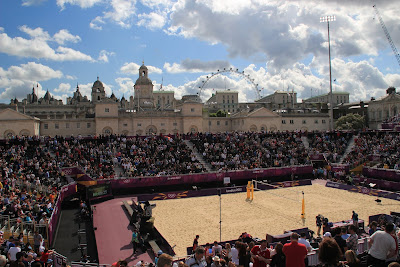 In the next match Brazil took on Czech Republic and apparently this Brazilian pairing are one of the favorites for gold. The person whom I was impressed by was the 2.06m giant named Alison. He was big and tall and good. He is a blocker and normally you see the players try to block a spike and either get it or miss but he was different. He was so big that even when somebody tried to dink it over him he would reach back and get it anyway – a monster! Although they dropped a set, they still won the match. 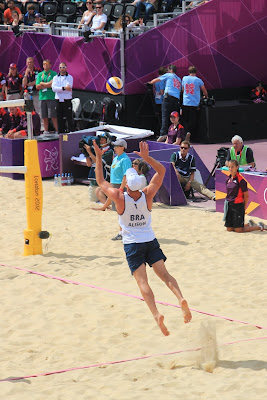 In true British style, the sun went away, the clouds came in and “liquid sunshine” came down. At first it was passing showers but then eventually the heavens really opened and we scampered out of the stadium just before the end of the final set. 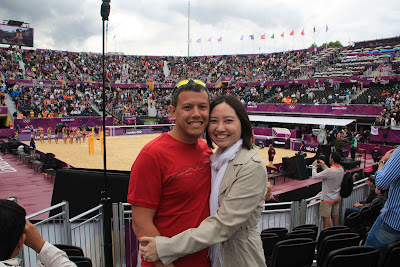 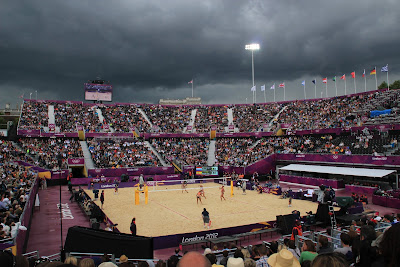 This entry was posted in travel and tagged beach volleyball, london 2012, olympics, volleyball. Bookmark the permalink.